Connect with our Global Wildcats.

Interested in learning about the international student experience? Want to get in touch with a current student from your home country? Someone with similar academic interests? A current student involved in research? Something else? 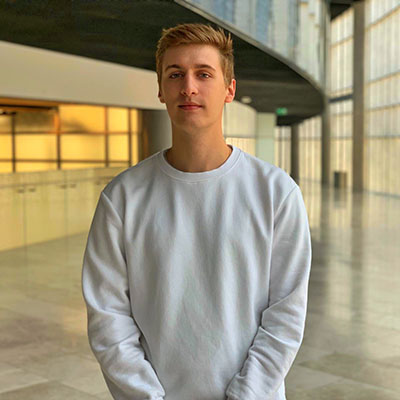 Best Class at NU: Any class with Professor Shtern-Petrovsky

Favorite Restaurant: Five and Dime: A portion of nachos lasts for DAYS

Fun Fact: I once ordered a papaya salad (which in my head sounded like a nice, fruity dessert). I subsequently almost choked on the very (!) intense spice and a crab claw that I did not expect to find.

Favorite Restaurant: The food (and the people!) at Habibi Inn

Fun Fact: Midwesterners love to make casseroles—I don't know what casserole is and I'm too afraid to ask!

Fun Fact: I make spotify playsists for everything!

Best Class at NU: The City: Urbanization and Urbanism

Fun Fact: A couple of years ago, I was trying to fly back home and got on the wrong airplane. I didn't notice and ended up in a different country!

Connect With the International Admission Team

Send us an email at nuinternational@northwestern.edu or give us a call at +1.847.491.7271 with any admission-related questions.

Global Wildcat volunteers are critical in connecting with prospective Northwestern students, often communicating via email or video chat or participating in student panels.